“The Joker War” comes to a city-shattering conclusion as Batman battles The Joker in a brutal, no-holds-barred duel! This is a fight 80 years in the making, and its outcome won’t just change Batman’s life-it will change Gotham City for years to come! Plus, catch the first glimpse of the new villain known as Ghost-Maker! And after the senses-shattering conclusion of “The Joker War” come to a pair of short stories that will chart what’s to come in Gotham City and Batman. Don’t miss the first showdown between Batman and Clownhunter!

What I thought about it…

With the extra-sized Batman #100, writer James Tynion IV and artist Jorge Jimenez wrap up the epic Joker War arc with an excellent final confrontation between Batman and The Joker. The first half of this issue delivers the high octane battle fans have been waiting for.

The Joker War is fought on multiple fronts, and the story bounces between Batman’s confrontation with Joker, Barbara’s restarting the Oracle network among other things. Through it all, the reanimated Alfred keeps chatting away as Batman struggles to keep up with a Joker that’s sporting his bat suit. 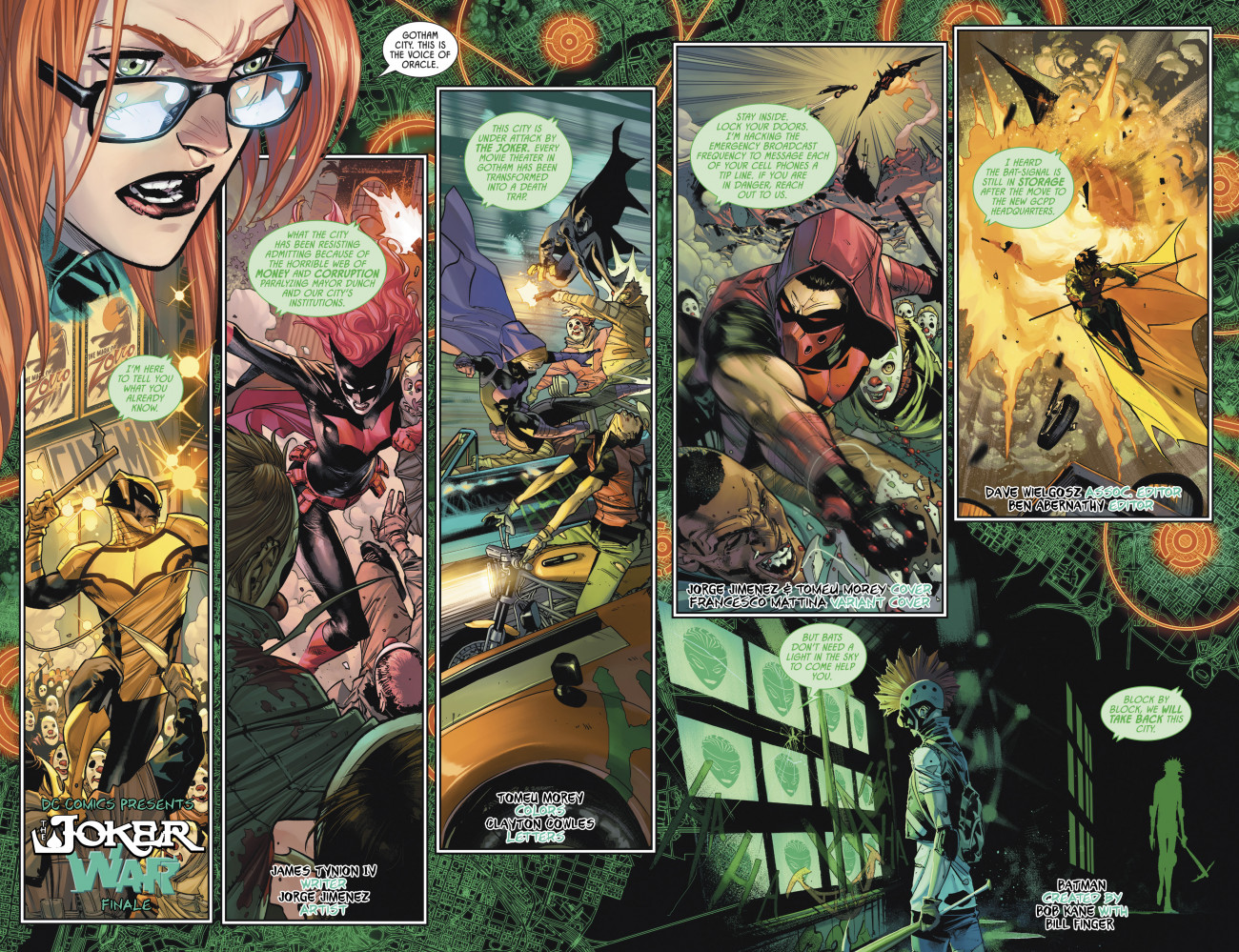 I won’t give detailed spoilers here, but Batman #100 had moments I did not expect. James Tynion can give Batgirl and Nightwing key moments in the issue. I liked the Nightwing stuff the best because it made me forget the nonsense the character has been put through for about a year. Overall, I thought Tynion crafted a satisfactory payoff to this Batman/Joker saga.

Tynion also includes a tease or two for future storylines with Batman finally meeting Clownhunter in an interlude drawn by Carlo Pagulayan. The only moment I can critique is a sequence with Harley Quinn that didn’t quite fit in with everything else. Maybe that’s unfair since the sequence does matter to the main story. But for one reason or another, this Harley section took me out of the story.

Art wise, Jorge Jimenez delivered some of his best work in this arc. His Joker is terrifying but funny at the same time. Truth be told, I found the zombie Alfred more terrifying than anything else in the book. I haven’t heard whether or not Jimenez is staying on the book or not, but I hope he does. His Batman art is part of what brought me back to the series after the wedding bait & switch a couple of years ago. Elsewhere in Batman #100, Tynion teams with artist Guillem March to hint at what Joker’s next step might be. Guillem March is a hell of an artist too, and this book is no exception.

After 80 years’ worth of stories, doing a great Joker story isn’t easy. Just about everything has been done when Batman confronts the Joker. But I thought James Tynion IV did a superb job in building towards the Joker War, spreading out the main storyline, and delivering a satisfying payoff. Whether the Joker War will go down as an all-time classic Joker story, I don’t know, but I was happy with the final product.